I have found that the best way to implement is to ALWAYS document EVERYTHING at a client's office. This way you have a record of what was discussed and implemented. At any point you or your client may need to refer back to what you have discussed. It also makes for re-use of transcripted info, where you will find that you start using the same material as questions start repeating. Attached is a first off Evaluation where a basic assessment was done, as well as a starting point. Obviously client specific information is blanked out as this is treated as confidential. 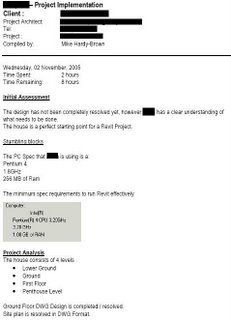 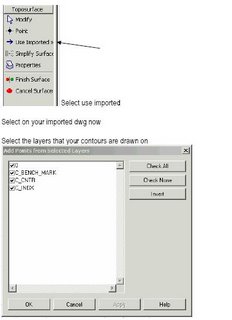 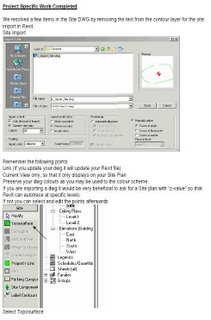 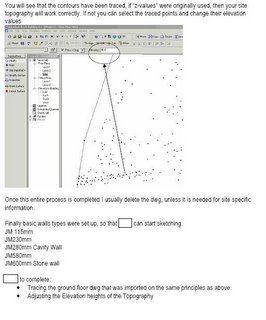 Posted by Unknown at 8:22 PM No comments: Links to this post

A Definition of Implementation

A Definition of Implementation

"Implementation is the carrying out, execution, or practice of a , a method, or any design for doing something. As such, implementation is the action that must follow any preliminary thinking in order for something to actually happen. In an information technology context, implementation encompasses all the processes involved in getting new software or hardware operating properly in its environment, including installation, configuration, running, testing, and making necessary changes."

After looking at this simple definition, it sounds so easy!!

However I like to break up Implementation of Revit into at least 2 categories.

This is slightly more difficult as you will be based in the Architects office, and it is normally difficult to get everyone in the same room at the same time.

I prefer to start an Implemenation like this, with a Revit Fundamentals course at our ATC

It is generally a 5 day course, which comprises of 3 days of intensive training and 2 days of “hands on training” where students bring in a project they want to start converting to Revit.

Students are usually so tired by the fifth day and their brains have turned to mush. It is almost pointless carrying on any more until after a weekend.

I like to give them a week of playing around on Revit in their projects which helps them to find “problems”. A further 3 weeks of a hands on approach in their office is best practice.

As NO person will catch on the first time, it is often necessary to do Project Implementation where you also have to use a prescribed customized implementation plan after determining their exact needs. This is fast track implementation.

Posted by Unknown at 7:40 PM No comments: Links to this post

Bit of a background

While I was rummaging around on AUGI I stumbled upon blogging.

What a fantastic concept. I have found competent Revit users to be so giving of their time and knowledge on forums like AUGI and our locally based Techforum .

Bit of a background (as this seems to be a norm)

I started working on AutoCad v12 while I was studying Architectural Technology, I was amazed to see what I could do, and how quickly I could churn out student projects on my 486 DX 66 pc.

While I was doing my internship at a local architect (where only the select few got to use ACad), drawing out brick courses for multi-storey buildings on a drawing board, making copies for the Cad guys on the ammonia plotter and other menial tasks, I decided to move on to another company who was more involved with housing construction & Project Management. I completed the Project Management Diploma moved onto site with a laptop and a South African based drawing programme.

As the challenge became less, I moved on to more exciting fields. This is where I started working properly on AutoCad. I then found myself fascinated with all of the latest software trends, specifically in the Architectural market.

I was working in the Architectural dept. of a national bank, and jumped in as they were amalgamating with four other banks and redesigning the way ahead in corporate identity.

This is where I was also first exposed to Architectural Desktop.

As I am sure most people in this industry do, I was churning out my own private jobs at night working on fantastic 3d utilities and renders.

Once again the challenge was dissipating and I moved completely out of the Architectural field.

Big mistake, So I jumped back in head first at a company where I had to redraw a large campus and was responsible for all of the facilities management rental calculations etc.

Here I was introduced to Revit. Wow, I needed to be more involved in this programme.

I was offered a position at Cadplan a local reseller, where I would be involved in implementation and technology dept. specifically testing the boundaries of Revit.

I have trained a plethora of Revit Fundamentals courses to the point of feeling like a performing monkey on a week to week basis.

We were fortunate to have received Revit Training from

Subsequent to this training I then started to concentrate on Revit Implementation.

I have successfully implemented Revit at many Architectural firms as seen in our success stories.

I will be posting (quite often the lighter side) of Revit Implementation Stories, both successful and unsuccessful.

Posted by Unknown at 8:40 PM No comments: Links to this post